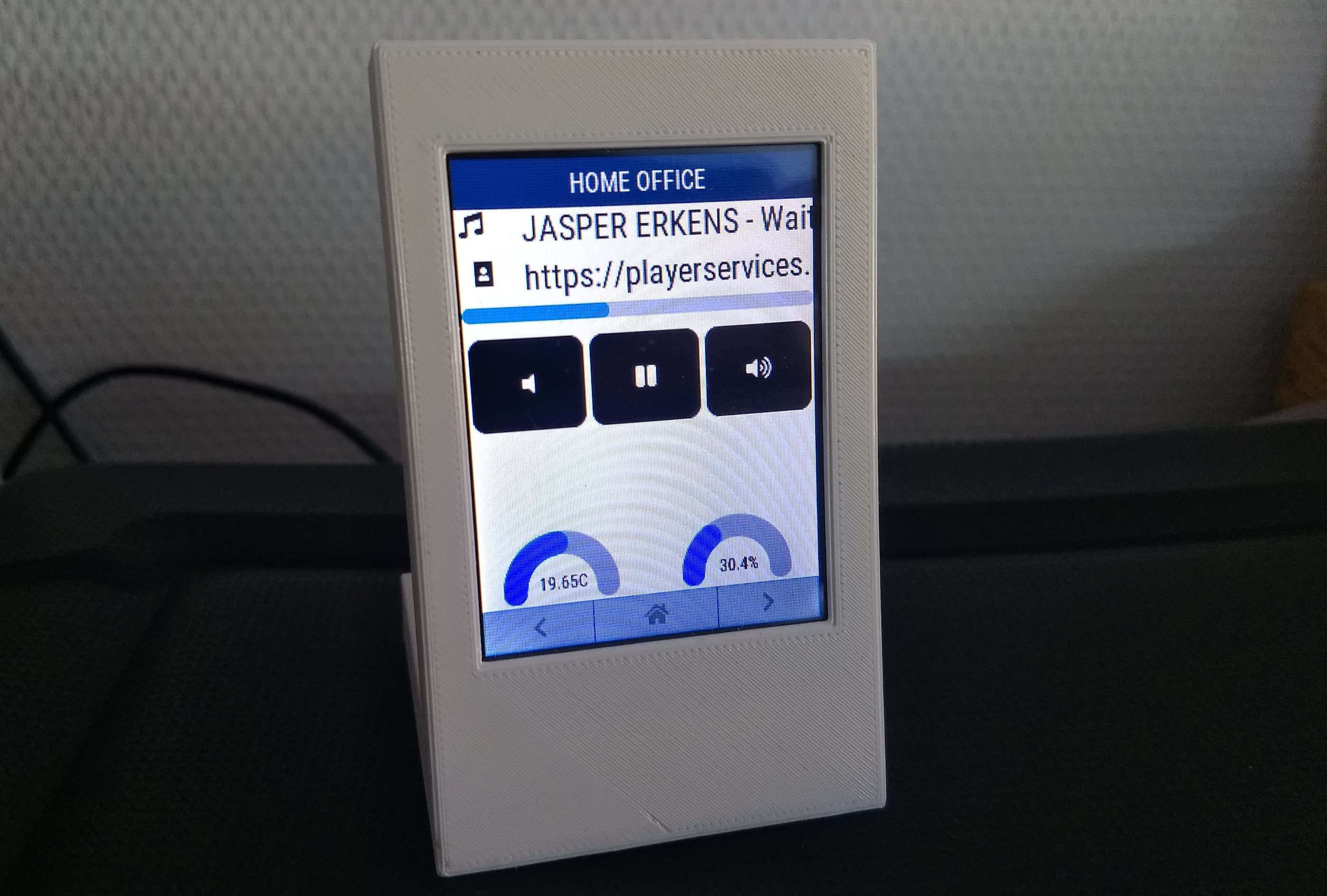 I discovered HASP - open hardware edition while I was searching for projects integrating touch interfaces with Home Assistant.

With this opensource firmware, you can easily and cheaply make a network connected touch control panel to control devices or show values.

When I bumped into a nice 2.8" TFT Desktop stand enclosure on thingiverse, I remembered I had an unused 2.8" ILI9341 display with resistive touch layer from a previous project.

Connecting the dots... I had all the necessary parts in my workshop, this would make a nice project to make over a weekend evening.

The main job of openHASP is to display a user interface on a TFT display, and expose it over MQTT, the serial port or a socket.

This makes it ideal to control devices over WiFi and display state and status.

The interface is based on the concept of pages, each is screen-sized, and can be called onto the screen. Page 0 is special and can be used as an overlay with e.g. time and/or navigation tabs.

The pages are defined using lines of JSON, and pushed over MQTT or uploaded over the built-in HTTP web server.

The state of the widgets can be modified over MQTT topics, and when a user operates the touch interface, MQTT messages are published.

I kicked things off by printing the enclosure, since this requires the least amount of effort and provides tangible motivation to solve any roadblocks I would encounter.

Downloading a file, slicing it and printing it on m Prusa Mk3s is routine to me, and a few hours later, I had something that fitted the TFT display perfectly. Thank you for sharing your design, smily77! 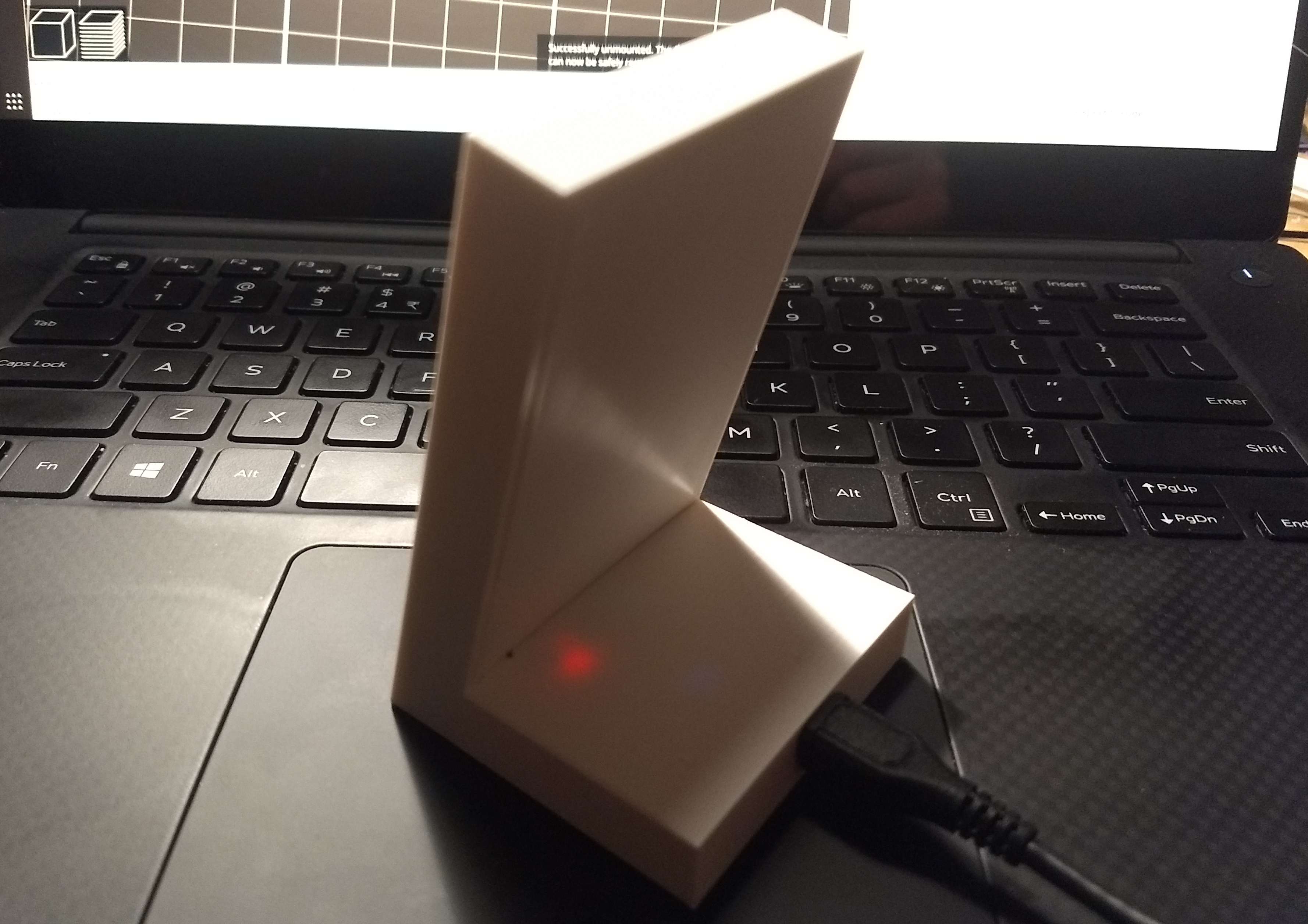 The 3D printed enclosure from the back

I used a TTGO Mini32 ESP32 board, since I didn't want to cheap out on processing resources. The enclosure had a support for the Wemos D1 mini however, so I had to use a knife and pliers to remove some plastic to fit the board.

I fixed the MINI32 board by using two small screws into two holes I pre-drilled into the enclosure using a screwdriver-style hand drill and a <2mm drill bit (well worth having that cheap tool in your toolbox!).

I soldered wire wrapping wires between the TFT and ESP32 boards, and fixed the ESP32 board in place. (The wires I used are a bit long considering 27Mhz SPI, but no issues seen)

TTGO Mini32 wired to the screen

I hot-glued the display into place, making sure not to put any stress onto the resistive touch layer.

I followed the instructions to build openHASP, but used a modified platformio.ini:

The thomas_secrets.ini file contains predefinitions for my WIFI and MQTT setup. The custom user_setups ini file contains modifications to use the ILI9341 display. These should find their way to the openHASP repository.

It was certainly not rocket science to make these adjustments, luckily the openHASP developers were very helpful with the more daunting questions I had when bringing up this project without reading all the documentation.

openHASP supports most LVGL widgets I played with when getting to know LVGL during my Mood Control project. I picked the example 'Dash UI page` from the documentation to play with once board bring-up was finished and WiFi and my MQTT server were connected.

It's easy to interact with the display over MQTT.

I used these mosquitto commands to modify the display's widget state:

To update the temperature arc 'dial' to 20 degrees:

To update the humidity arc indicator text to 90%

I intend to use this build as a replacement-on-steroids for my IKEA hockey puck control that I use with home assistant, but that's for another day.

A big thank-you to the people creating HASP and openHASP, the 3D design and all free-software home automation projects!