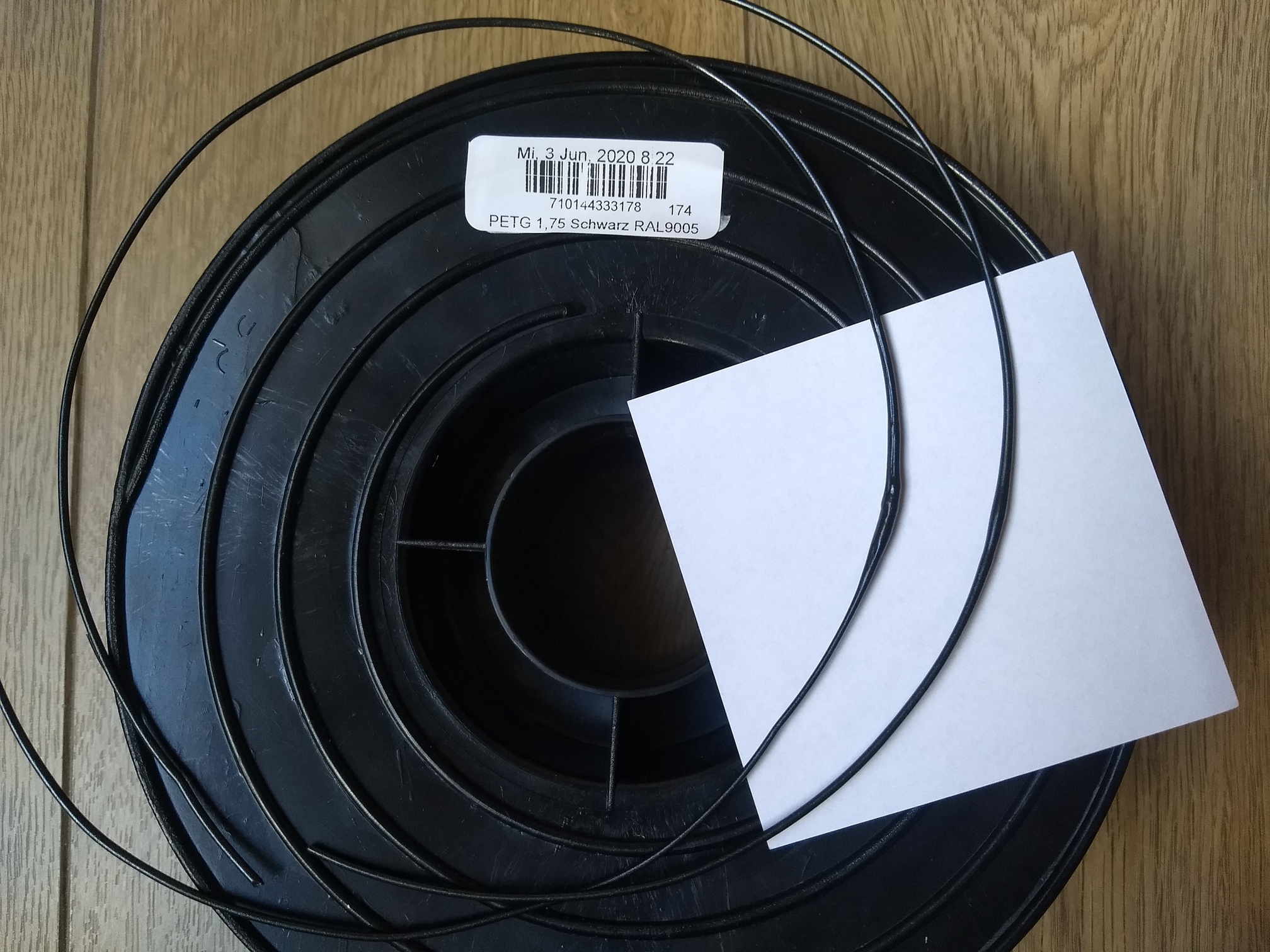 I read on Facebook someone bought low-cost filament from http://www.owl-filament.de/. I'm always interested in alternative sources, so I took a look.

I already had a limited set of PETG spools in nice colors and was interested in some cheaper spools for prototyping purposes. The price was 'cheap' indeed, read along to see how this manufacturer's quality turned out to be...

I first opened and tried the prototyping filament. 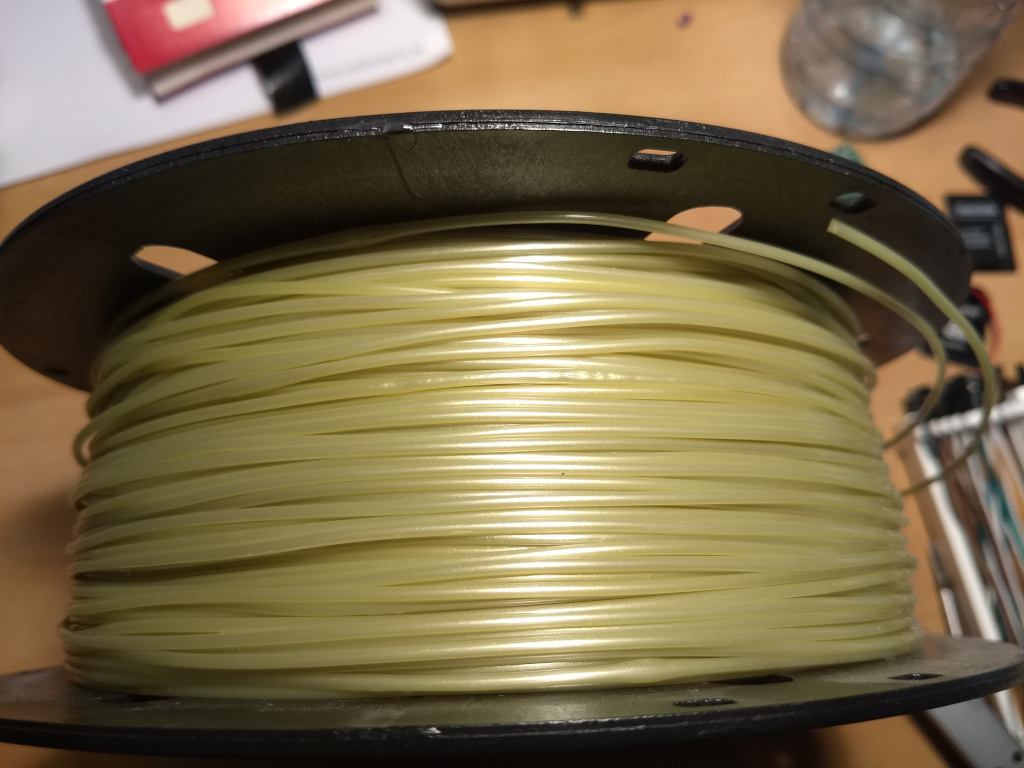 The five rolls were of acceptable colors, two mostly transparent, one yellow, one grey, and one in a strange mustard shade. So while expecting nothing of the colors, I was pretty happy with the coloring.

I picked the ugliest color to churn out some prototypes, and made a few small prototype prints with this spool.

I noticed some small gaps in those prints, which I assumed were caused by the filament being quite wet, since a lot of bubbles are visible when the filament comes out of the extruder during loading.

When collecting my finished print on a sunday morning, I didn't immediately notice that the print failed because the printer stopped extruding filamnet a few milimeters from the top.

It turned out that the extruder had been jammed, leaving its spinning gear grinding through the filament.

After unloading the filament to store it in my dry box, I noticed two malformations in the filament.

The filament was actually 3mm wide in two spots. 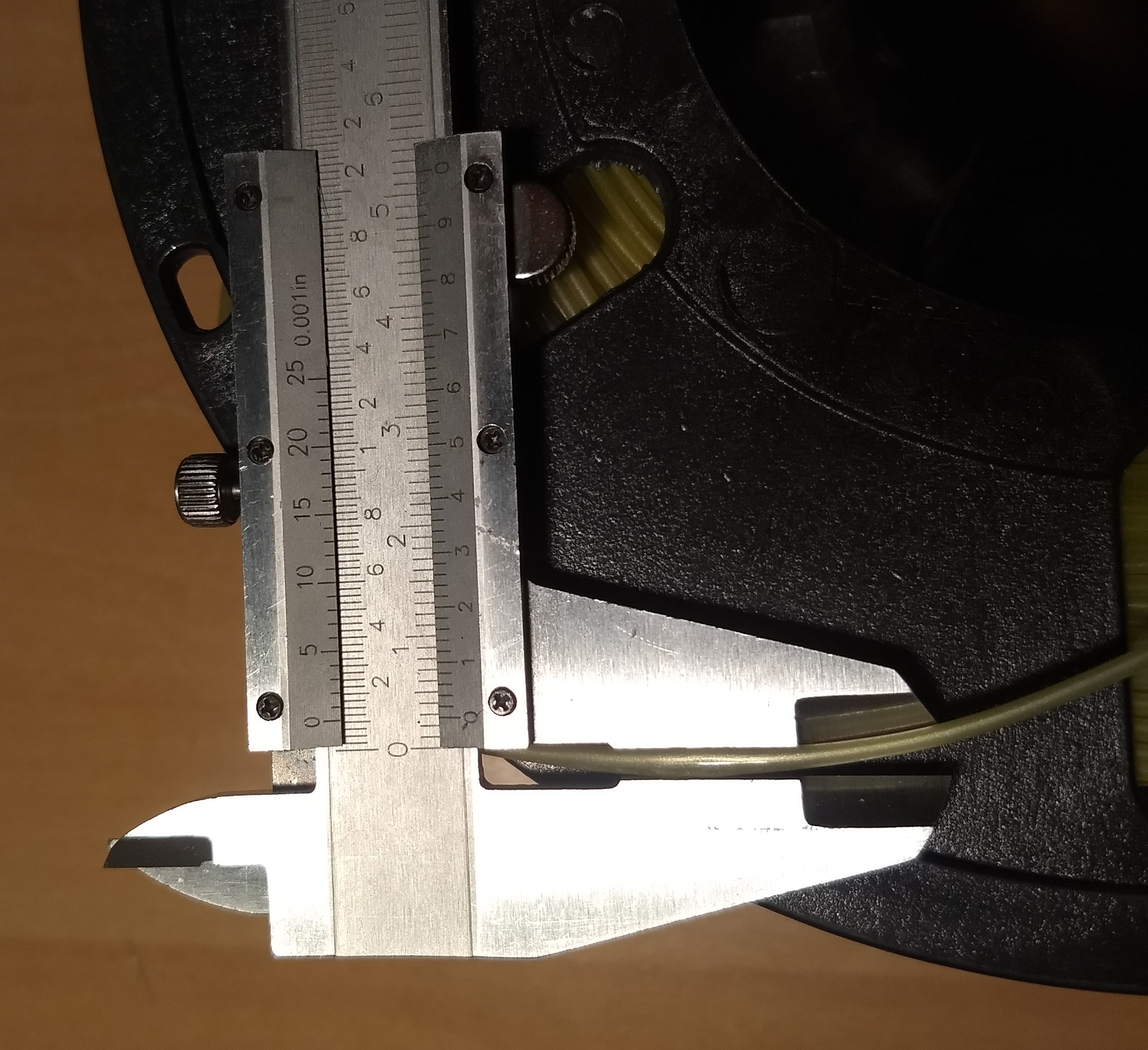 Wow, this is clearly unacceptable. This is the description from their site:

I took a closer look to the other spools, and in the grey spool there are a lot of air bubbles visible. Incredible! 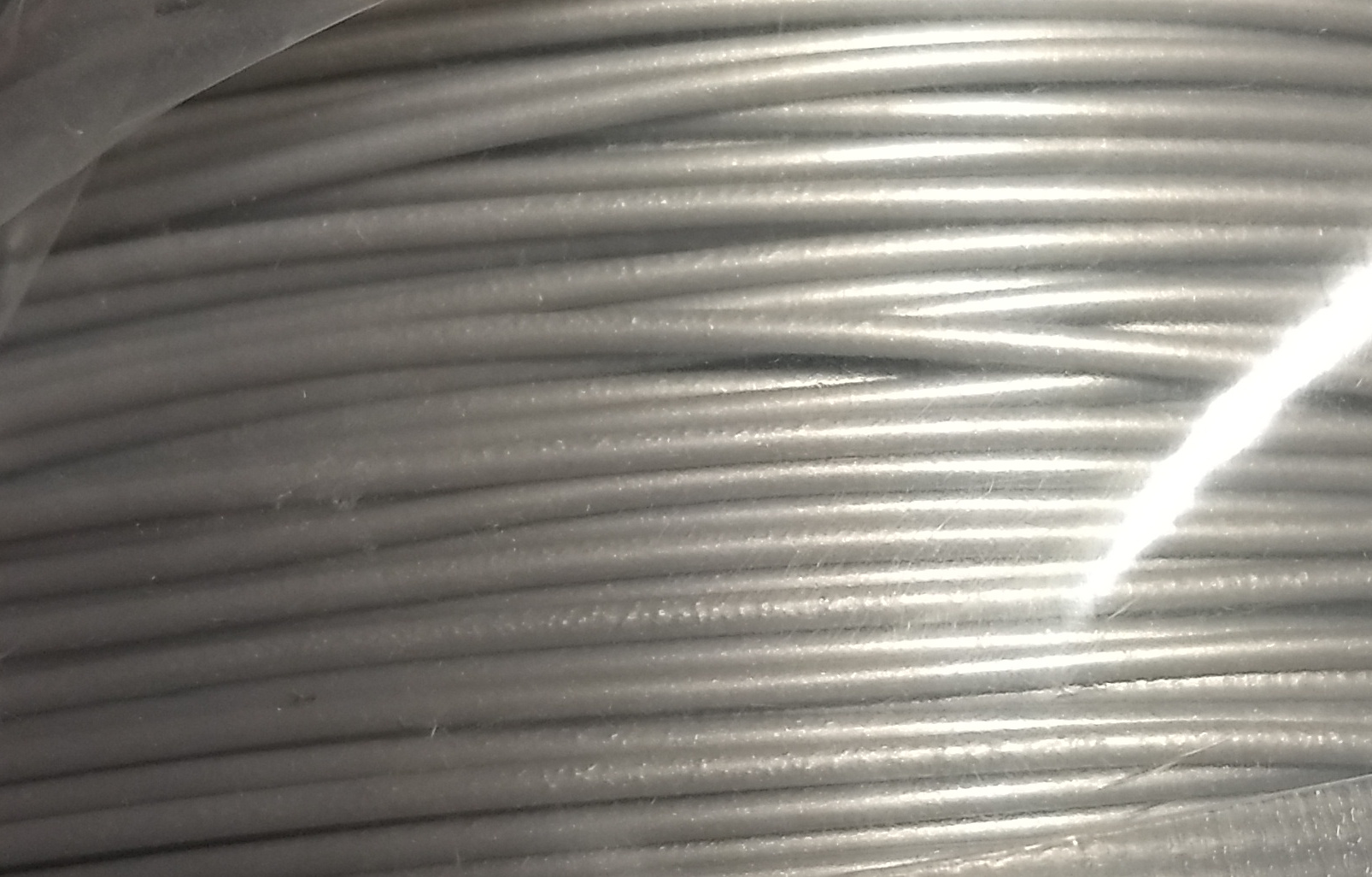 A few days after being upset because of the failed prints with the prototype filament, I needed to print a black object, so I got out one of the two regular-priced spools.

The filament was covered in dust, with filament rubbing against the bag leaving imprints of dusty lines on the inside of the sealed bag. One of the bags was ruptured, I think from having been dropped at the factory or during shipping.

I can only imagine the dust is from having the spools exposed on a shelve for a very long time. The stickers on the spools indicate that they are recently produced however. Perhaps it is only the stickers that are new? I can't imagine a factory floor producing supposedly 'low tolerance' filaments would be so dusty that so much dust can collect during extruding and winding the spools.

I started a print and after a while I heard a squeaking noise. I went to the printer and it was still busy doing its job. But as I noticed that it was not extruding the noise appeared again. The carriage was pulling the filament and bending the plastic tube holder on top of the frame.

Turning purple, I hit the reset button. Another blob, this time on a regular-price filament roll was jamming my bowden tube. I cut of a long piece of filament and retried.

After my print was finished, I noticed another blob on the outside of the spool. I had avoided, by chance, another jam.

There was an offer of 5 PETG spools for 53,52 EUR (10,70 EUR per 1kg Spool). That is a good price for what was described, basically their regular filament but with imperfect colors.

To order this, they mentioned the shipping rate for Belgium is 9,90€ for a 3-10 kg package. To fill the available weight in the shipping category and make shipping a bit more economic, I added two 'normal' PETG spools for 15.50€ each.

To me this is a very bad deal. After this experience I don't think I will ever be buying 'cheap' filament ever again. To me my 3D printer is a tool, not a toy, and an expensive one at that, that I want to be reliable.

This filament manufacturer clearly is not concerned with quality, and not with customer service either.

Lack of response from owl-filament-de

Of course I sent an email to complain and got no reply. A few days later I sent more complaints, via the forms on their website that time. Three months later I still have not heard from the people at owl-filament.de.

I would say, don't fall for this scam like I did. As a manufacturer, having lower prices is no excuse for not delivering on promises. And there is no excuse at all for not replying to complaints.