Using your WRT54 to secure your email connections 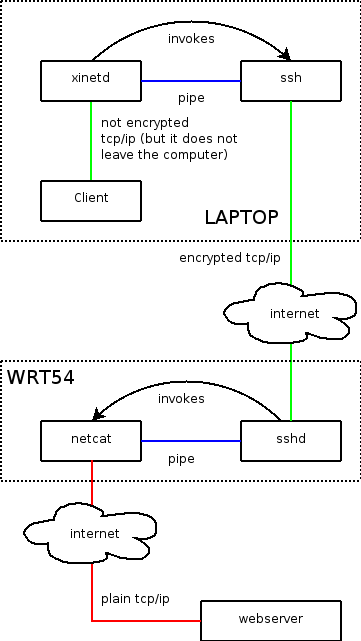 Fetching POP3 mail over an untrusted WiFi public access point is dangerous, as the password is transmitted unencrypted (in plain text). Anyone with a laptop and a suited program can sniff your password right out of the air, along with your email. Sending mails is also impossible most of the time, since most ISP's only relay mail from computers directly connected to their network.

These two problems are solved by fetching and sending your email via an encrypted connection between your laptop and Internet gateway at home. If you run Linux and have a WRT54G, and it's running OpenWRT, you're almost there. Just follow this guide and you'll be set in under half an hour.

Follow the PublishYourWANIp article from the OpenWRT wiki for this.

Install Openssh on the WRT54g

It is not necessary to install the openssh-client package if you do not wish to use the scp command to transfer a file later on in this howto.

Add the following lines to /etc/sshd/sshd_config:

The sshd init script will now create a key for the WRT54, this takes a while, let it do it's job, Keep the ssh connection open to the box. and lets switch back to your laptop.

On your laptop now, issue the following commands:

TUNNELNAME
The name of the tunnel (substitute in the service and server_args line!)
REMOTEHOST
Your WRT54's dynamic DNS hostname (eg; killerbunny.dyndns.org)
PORTNUMBER
The port you want this tunnel to listen to at the local host.

Create a ssh key for for each tunnel

Create a directory in /etc to hold the ssh keys and create an empty file /tmp/authorized_keys:

Press ENTER when asked for a passphrase (this is important!).

Now transfer the /tmp/authorized_keys file to your WRT54 (substitute REMOTEHOST by your Wrt54's IP or hostname):

By now the keys are probably generated. The OpenSSH daemon will not be running probably, this is because the dropbear sshd is still running.

If this works, you're sure the daemon will start after reboot, so, reboot the box.

Your mail client has to fetch mail now at the localhost instead of your provider's server. The xinetd daemon will then create the tunnel to your WRT54 on the fly, and the WRT54 will connect to the server depending on the key used to create the tunnel.

You can check if the tunnel is created without asking for a password with the following command:

Liked something? Worked on something similar? Let me know what you think on Twitter!
You can direct-message me, or mention me @thouters
posted at 00:00  ·  networking  openwrt  ssh  linux
❮ Howto: Intel 8051 assembler .exe onder UNIX Vim 8051 assembler syntax file  ❯