OpenWRT as a wireless bridge 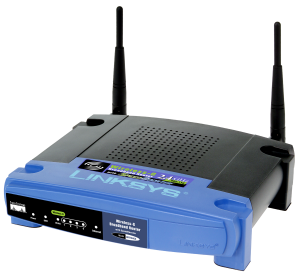 I usually have more than one computer set up in my bedroom, a whole LAN segment so to speak. I used to network them together using a 10mbit hub (with a coax connector connected over the (75 ohms television coax) to other PC's in the house because it was the most practical way.

I switched from a Linux/i586 internet gateway/router to an embedded solution (Linksys WRT54G) so my brother could have wireless internet using a PCI WiFi card (I also didn't like the idea of having old generic pc hardware powered on 24/7 and connected to the net). Before I bought the WRT54G router, I read the firmware is open source, and groups of people released unofficial firmwares with extended functionality.

I started wondering if I could make the box act as a bridge between the wireless LAN and its UTP ports. I'd have to buy another device to replace the WRT54G that was sharing the internet link... I bought a cheap D-LINK router for 50 euro so I could get busy with the WRT54G. I regret buying the cheap D-LINK router (out of impulse, clearly). Looking back it would have been a much better investment if I spent the extra 30 euro and bought a second WRT54G).

The OpenWRT Wiki showed me that it was quite trivial to configure OpenWRT to act as a wireless bridge, and one winter evening I gave it a shot.

To get started I had to flash the latest OpenWRT (white Russian release candidate) to the device (using the web interface). When that was done, I set the root password (and thus enabling the ssh daemon automatically) via the OpenWRT web interface.

Next I could login to a shell over SSH WRT54G router. After consulting the OpenWRT wiki, I found out I had to set the wireless configuration NVRAM settings to client mode, with WEP password, and disable the DHCP server. That's pretty much all I remember about it, It was very simple and took me about one hour, including reading and exploring the OpenWRT wiki. The Linksys router proved to be a very useful and powerful tool, I'm looking forward to getting another one to run dnsmasq and maybe have it run on some steroids to boost the signal strength. All these steps seem to be written down nice and clear at the moment, take a look at the OpenWRT wiki: OpenWRT Howto page

Liked something? Worked on something similar? Let me know what you think on Twitter!
You can direct-message me, or mention me @thouters
posted at 00:00  ·  openwrt  networking
❮ Alarm clock using a PIC microcontroller Linux on an iBook G4  ❯