Visual basic is an easy programming language for the windows platform. I've spend some creativity with it years ago, and the result is a bunch of half-finished programs. I started creating stuff with VB6 out of interest when I was a kid. I didn't have any literature on programming or experience. Be warned these programs are childish, useless, old (most dated 2002) and have very nasty code (there's no use in sharing it).

When I created my website years later I gathered a list of my 'creations' I made with VB6, and just for nostalgia I still have this list.

I did NOT put this software online with the intention of it being useful to anyone. It's an old, abandoned project with lots of bugs, bad usability and design. In fact, I am very sure it is useless. It is not suitable for use as a development environment for PIC's/JAL.

Jal Code Studio is a program I wrote in Visual Basic to edit and compile JAL code with ease. It's got messy code, unfinished features, but it worked fine for me (I could change whatever I disliked on the fly :)). I stopped development and it's not finished. If you're interested in it, try the binaries or the source code and use it as you like, finish it if you like, or just look at these fancy pictures and think 'whatever'.

Jal Code studio is a thorough rewrite (it was named JalSuite earlier on). It's based on some reused components, but I've cleaned that code and made it more efficient. I have also added more functions, for example I removed the JAL toolbar (which was on the left side of the screen) and placed a better version in each document window (previously only the included files of the selected source file were shown).

Its binary was close to 5 megabytes (most of it being bitmaps!), I used to include lots of eye candy in the form of bitmaps.

This is the central point of the program, It's used to open your files. Behold a description I wrote down back in the days:

You can select the folder with the drivebox and directory list on the left and the file with the filebox on the right. To open the file you can double-click it, or use the 'open' icon on the toolbar. You can hide the directory list and drivebox by clicking the second icon on the toolbar of the file browser, | clicking it again will show the dirlist and drivebox again. The third icon is used to show/hide the comments for the files. The fourth file will start windows explorer in the folder the file browser is in. With the fifth icon you can set the comment for a file, a dialog box will show up asking you to enter (or change) the comment. With the last icon you can delete the file.

So you've opened a file. You can copy/cut/paste/save with the icons on the main toolbar. Clicking on the blue "Included" button on the bottom of the document window, you can show the left box with the included files links (see below). If you want to compile this file, you click on "Set as Compiler Input", the window will become orange (so you can see later witch window is selected) and now you simply have to click the compile icon on the main toolbar (8th icon).

This image shows the editor when the document is selected as compiler input, and the "included" list is shown. (and the file is compiled)

This is the settings window, you can set the jal.exe arguments, the hex downloader syntax and other stuff.

Although for some purposes it might be suitable, it isn't finished-product quality. I couldn't code well at the moment I wrote it, so the explanation is obvious... writing such a program from scratch is a big job when you're new to programming. Syntax highlighting, is also something that is missing, replacing the rich text object by scintilla or a similar library would fix this the right way. 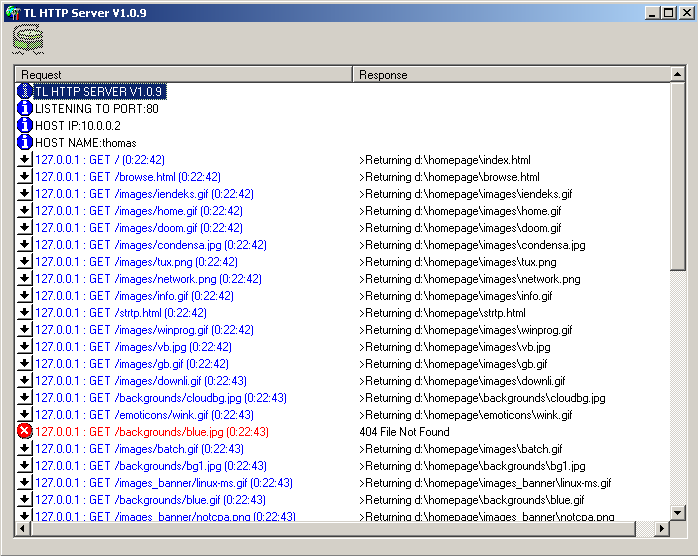 This is a really basic web server, and works with html only and text pages, but binary transfers didn't work that well. (they work but don't comply to any standards). It also doesn't support multiple connections at once (it isn't multi threaded). I made it by analysing the data between a browser and a web server. 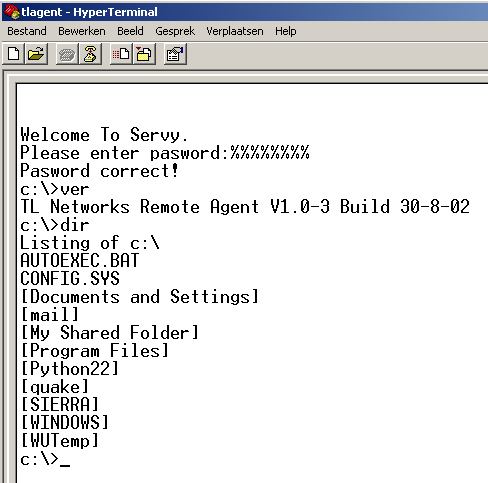 Pretty much a telnet server, at the time I didn't know how to open a pipe to a program (the command shell in that case) so I had it parse the incoming command and execute a subroutine depending on the command. 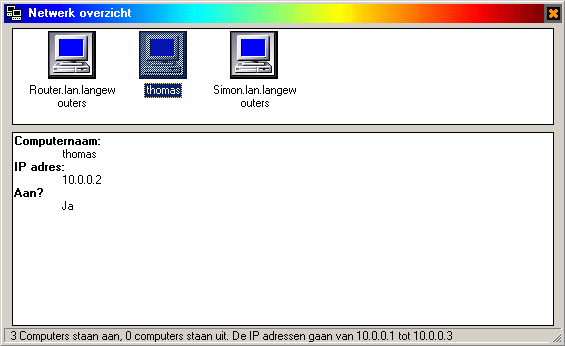 You can send messages to other computers with lantool, and see which computers are online. The title bars you see aren't those of windows, I made them myself with some API call's and stuff to make the windows moveable by dragging the titlebar(that isn't actually the one produced by the windowmanager). 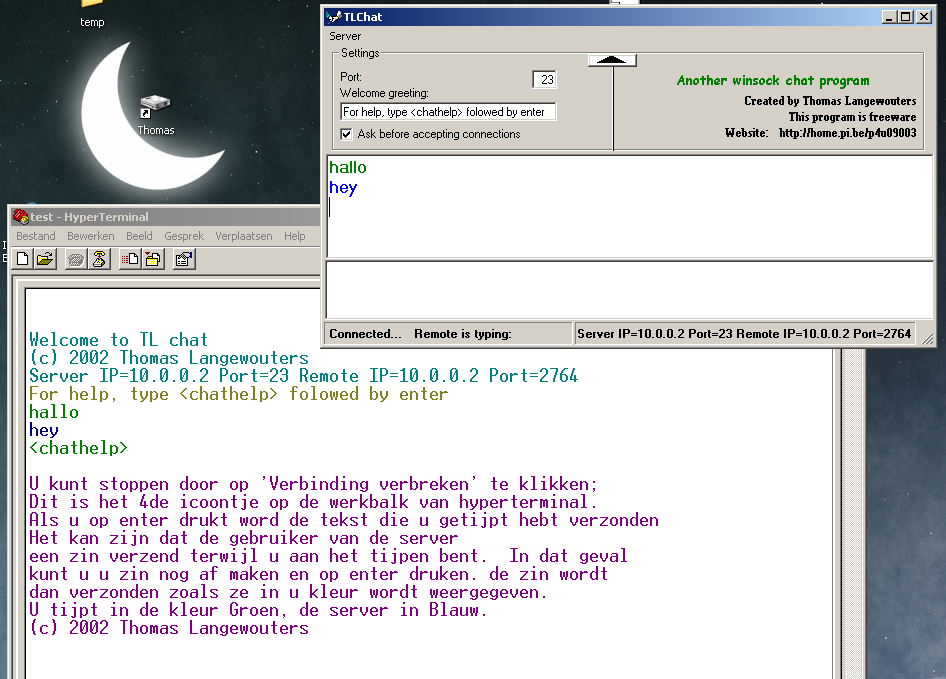 WinsockChat is a 2-person chat program that uses a telnet client like hyperterminal as client. The first person chats using the server program and the remote with the terminal emulator.

Pixplorer is a program to browse through picture folders.

I once tried to make a program that monitors Winamp and displays the current playing song and time on an LCD. The result is a program - which works pretty well and does what I wanted it to do. I stopped to develop it (like all of my other vb-projects) after I realized it was nothing but a waste of time.

Quite useless actually, but it's a little program (I spend more time on the graphics stuff than programming) that opens/closes your CD-tray when you click on the button.

These are joke programs, just made for scaring the hell out of people. I don't spread them, nobody except me has them. (had them actually) At the moment I'm not working on or using these things anymore. THESE AREN'T VIRUSES. I've never made anything that causes damage.

When you start destroy+ you see this window:

After a while it advertises that some files have been deleted:

But after a while you get some error messages like this one;

you get 6 of these error messages,-they're all different- then the program ends.

I know, I know cool name huh, I didn't try to find a good name for it, but that's not important. Mopcdeject is the best of all, it doesn't show a window.!